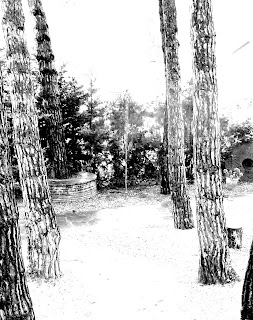 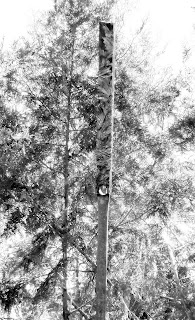 In a way the process leading to 'digam' was a bit more subconscious than the other sculptures. The cross-hatched length of steel that sits atop the sculpture was carved a couple of days before it was used to guide this sculpture. This treatment of the steel became my way of adding brushstrokes to the environment, as well as my way of, again, 'amplifying the organic by exposing the liquid nature of steel'. The site was contemplated for days, as it is of primary importance to the garden; the trees that were planted generations before forming a perspective from a viewer both on the ground and from the main terrace of the house at elevation. The issue for me was that the perspective had no focal point, save for a neighboring house. The entire sculpture was simply a result of my desire to elevate the sculptured, textured length of steel, with vertical proportions similar to the trees, into the position of the focal point, particularly when viewed from the terrace. However, it was, as it was throughout the exercise, important for me that the sculpture remained aesthetically 'quiet'. When this decision on the placement of the length of steel was reached (by holding it balanced on end up to the sky in my outstretched arm), I went back and built the structure. Days before, my artist friend Marute had dropped off two poles with a clank in the grass and they lay there for a week or more, tantalizing me. I wasn't sure if I was going to use them, they were 'found, recycled' steel versus the virgin steel I was using for this collection, and of a different nature. But inside I also knew I would, and that it was up to them to find their use, which they did in Digam. Including the hole already built into the pole in the sculpture was not, for me, to imply a mouth, but a way to mirror the numerous other circles that populate the garden. When the sculpture was complete, before locating it, I leaned it over and impulsively welded 'D I G A M' into the length of plate steel atop. I signed and dated this piece 'tyler, 2010, 'to the trees' up the length of recycled pole which was enough to give the pole itself a slight bend (and with time, some varied coloration).
Days later I was asked if 'digam' were the title of the piece and I said yes. I was then asked why and what it meant. I responded that it was an expression that must have embedded in me while overhearing it in Catalonia as it is the only Catalonian one I chose to use throughout the collection, and that I thought it were appropriate for this sculpture as the piece is 'to the trees' and so saying 'speak' was my way of 'coercing' them.
The response was, "Tyler, it doesn't mean 'speak', it means 'Tell Me'".
After collecting myself and the phone that I had dropped, I said, "even better".
Posted by tyler at 02:36